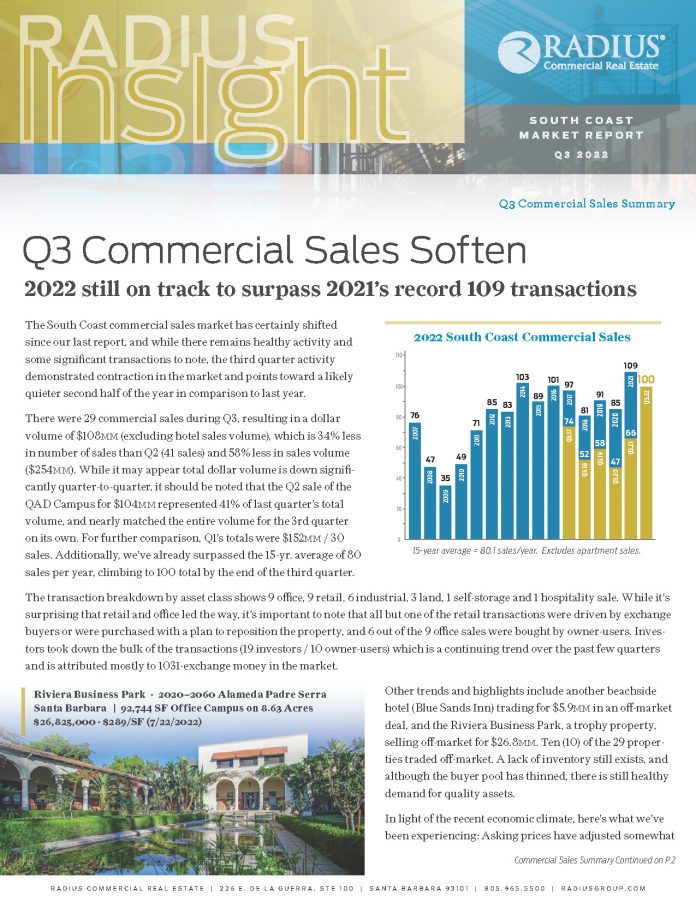 The South Coast commercial sales market has certainly shifted since the last report, and while there remains healthy activity and some significant transactions to note, the third quarter activity demonstrated contraction in the market and points toward a likely quieter second half of the year in comparison to last year.

Sometimes the numbers do not tell the entire story, as is the case in Goleta, where the office vacancy rate currently sits at 8.4% (near the 20-year average). The winds have shifted and this vacancy rate seems poised to increase as there are very few tenants in the marketplace. Much of the Goleta marketplace has been occupied by “tech office” tenants and many of these companies have not returned to the office. Recently Appfolio brought 90,000 SF to market for sublease on Castilian Drive. The 46,000 SF building at 6750 Navigator Way in the Cabrillo Business Park was fully leased before COVID and now it’s 100% vacant.

The industrial leasing sector remains very healthy, with low vacancy rates across the board on the South Coast. Santa Barbara’s vacancy rate sits below 1% for the sixth consecutive quarter with very few active listings, while both Carpinteria and Goleta continue to hover around 3% with just six (6) total spaces over 10,000 SF between the two submarkets.

Average asking and achieved lease rates were generally flat/stable. Highlight leases during Q3 include 24,000 SF taken by Jordanos at 80 Coromar Dr. in Goleta…

The industrial sector continues to be a mix of technology companies and various service industries. With no significant industrial projects coming online, we will continue to see low vacancy rates throughout the South Coast and, in many cases, competitive leasing situations for tenants.