The Voice of the Good Land
HomeCommunitySanta Barbara HistoryThe Downtown Freeway: Concrete and Chrome by 1980

The Downtown Freeway: Concrete and Chrome by 1980

The city of Santa Barbara is pregnant. The birth is expected in seven years, much too soon for some. Doctors have already determined the child’s sex: she will be a six-lane freeway from Salinas St. to Carrillo St., replacing the present Highway 101 route. The little bundle of joy will have all her identity problems solved before she takes her first breath: proponents say she is needed to alleviate existing traffic congestion, reduce traffic accidents and serve future traffic demands.

Statistics from the California Highway Patrol show that the 2.7 mile segment of 101 in question has one of the highest accident rates in the state. The heavy congestion presently experienced is expected to increase with the future increases in traffic volume. Finally, the new Crosstown Freeway will be less of a noise and air pollutant, according to the Environmental Impact Study (EIS).

The EIS on the Crosstown Freeway makes several comments on alternative plan 5 (see map), which has been approved by the City Council.

Ten thousand accidents can be expected in the next 20 years on 101, 2,000 for the same time period if altered.

Incidentally, the famous Moreton Bay Fig Tree, planted in 1877 and the largest tree of its species in the world is not placed in any danger.

Air pollution will decrease as stop-and-go traffic creates more pollution than does constant-cruise traffic and despite the predicted growth in traffic volume “Santa Barbara may not experience any increase in total pollutant emissions.”

The project will cost an estimated $38.7 million plus a possible $4.8 million extra for underpasses on State, Anacapa and Santa Barbara Streets which will be paid by the state and federal government.

The history of the Crosstown Freeway goes back to 1954 when studies first began. Highway 101 was completed in 1948; additional segments were completed in 1960 and 1964.

On Dec. 15, 1960, the first public hearing was held presenting four plans that followed the present 101 route. In June 1965 the City Council received the plans.

Daniel, Mann, Johnson and Mendenhall, a consulting firm, made an independent study in 1963 in which they recommended construction of an eight-lane, sunken freeway on the present route.

During the second public hearing on, Feb. 26, 1970, five plans were presented to the public. Ten months later, on Dec. 22, the City Council requested the Division of Highways to make additional studies.

Presently there are six plans, coming from private citizens and public agencies. Last November [1971] the City Council decided on alternative 5, routed over the present 101 route at ground level with the railroad tracks following and crossing streets going underground.

The city has been asked for a schedule of the Crosstown Freeway referendum by the Santa Barbara Community Freeway Committee. The committee is a recently formed affiliation of organizations including Lawyers’ Freeway Committee, Save Our City, Scenic Shoreline Preservation Conference, Sierra Club, Citizens for the General Plan, Zero Population Growth and leading members of other civic groups in support of “a sensible freeway policy for the Santa Barbara area.”

The committee has stated, “As the recently concluded freeway town meetings remind us, there is overwhelming sentiment for protecting our unique environment and for minimizing the dislocation of residents. We feel it is crucial that the public consensus from these meetings, at the very least, should be heard and considered by you (the City Council) before you execute any agreement with the State of California or with any other party concerning the freeway.”

The request was referred by the City Council to the mayor’s office. His reply was kept confidential.

The City Planning Commission considered two resolutions on alternative 5 in December [1971]. The first was proposed by Bruce O’Neal, a member of the commission whose resolution would have imposed restrictions on the Division of Highways in the design and construction of the freeway.

It specifically called for six lanes with underpasses designed with “imagination” and approved by the Architectural Board of Review. O’Neal was concerned that the city would be left with a bare freeway, unlandscaped by the Division of Highways.

But his proposal was defeated 4-3.

The second resolution was proposed by another board member, Nyle G. Utterback. It proposed a two block sunken section through the downtown area, rather than the present plans which keep the freeway at ground level. It stipulated that the railroad should remain in its present location, and that the freeway should not exceed six lanes in the hopes of alternative mass transit techniques.

The proposal was defeated 5-2.

Opposition to the freeway has remained philosophical and unvoiced, yet it does exist. However, it appears that the Santa Barbara Freeway is one pregnancy that will not know abortion.

UCSB – Once a Schoolhouse 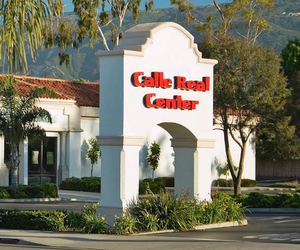